Updates for my Kitchen

1. Weekly meal planner- Dry erase, sticks to the front of the refrigerator, $2 at Staples. 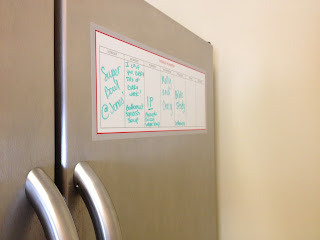 2. Freezer Storage Labels- to track the shelf life of food in the freezer. Download these here and print them on white shipping labels. 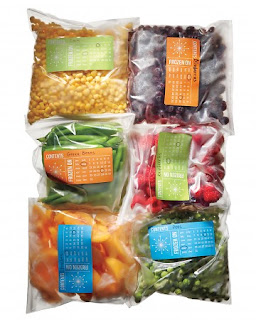 In Exodus 34: 12-23, Moses is inquiring of God. He begins by saying, "If you are pleased with me, teach me your ways so I may know you and continue to find favor with you." God replies, "My Presence will go with you, and I will give you rest." And then Moses said, "If your Presence does not go with us, do not send us up from here."

After the whirlwind of residency interviews in December, we are now facing the "Match Rank List" decision-making time. There are endless pros and cons to each program, and we find ourselves thinking through so many small details...As we seek to discern God's next step for us, we ultimately pray for God's Presence to be with us; His Presence is all we really need.

"Splendor and majesty are before Him; strength and joy in His dwelling place." -1 Chronicles 16:27

"How completely satisfying to turn from our limitations to a God who has none. Eternal years lie in His heart. For Him time does not pass, it remains; and those who are in Christ share with Him all the riches of limitless time and endless years. God never hurries. There are no deadlines against which He must work. Only to know this is to quiet our spirits and relax our nerves. For those out of Christ, time is a devouring beast." -A.W. Tozer
Posted by Ashley at 1:34 PM 1 comment:

Traditionally I like our Thankful Tree up by November 1st, and it is the 13th...One of the exercise class instructors at the gym always says "Yeah, do what you can!"...I'll adopt that motto for this season of life! 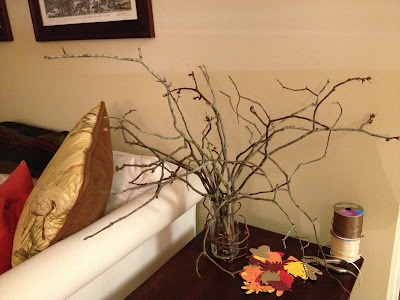 See our Thankful Tree here from last year.
Posted by Ashley at 6:31 PM No comments:

...for spaghetti squash! For those of you who may not have heard me rave about this already, I am continually amazed at the variety (in taste, color, smell) of fruits and vegetables that the Lord creates for our nourishment and enjoyment. Spaghetti squash wows me even more...just look at these things...squash that with a touch of a fork literally turn into spaghetti noodles...so fascinating to me!

I used a combination of my grandmother JoJo's recipe, this one from the blog Two Peas and Their Pod, and my own inspiration to create this spaghetti squash dish.

First cut off the stems of each spaghetti squash and then slice in half lengthwise. I got Cole's help with this part because they are hard to cut. Scoop out the seeds and other messy stuff inside (just like a pumpkin). I would suggest using 1 medium sized spaghetti squash for every 2 people. Brush olive oil, salt, and pepper on the cut sides and then turn over (cut side down) on a baking sheet. Bake at 400 for 50 minutes. 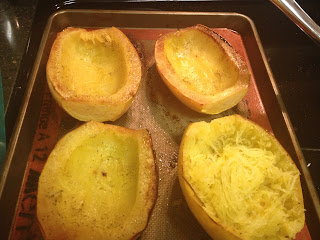 In the meantime, make the sauce. I combined 2 T olive oil, 2 cloves minced garlic, 1 onion finely diced (with the chopper that I always mention on here), 6 roma tomatoes (or any tomato) also cut with the chopper, and 1 cup mushrooms. Saute until onions become clear and sauce is warm throughout. Reduce heat and let sit on low heat until squash is ready. 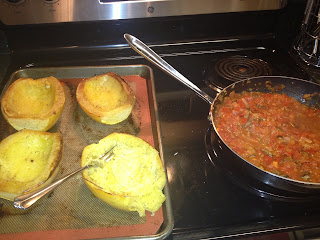 Remove squash from oven and flip over so that the cut side is now facing upwards. Take a fork and run it through the squash to form the "noodles". Spoon into dish, top with sauce, shredded parmesan cheese, and fresh herbs (basil and oregano). 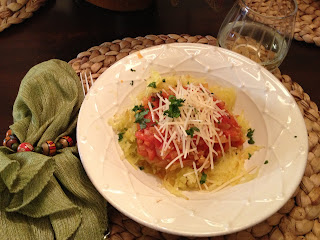 *JoJo combines the squash and sauce to make a casserole dish, adds a little dry white wine, and then bakes it until heated.
*It would also be good with store bought spaghetti sauce if you are in a time crunch.
*Also, I thought it could be fun to serve the dish in the halved spaghetti squash.

Around the Sims Household

In October we have...

hopped on a plane to celebrate Cole's cousin Dan tie the knot in Rhode Island! We had a fun weekend with family.  Surprisingly, we found our time on the planes and in the airport RELAXING to be able to sit and read, a rarity for us these days.
Last weekend we had a delightful visit from Cole's grandparents. We appreciate them so much for coming to Charleston for a visit. We played the role of tourists, visiting Fort Moultrie, Charleston Tea Plantation, and Angel Oak, and took them "off the beaten path" to some of our favorite places to eat- Bowen's Island and the Tomato Shed.
Other happenings lately...

Unfortunately, my debit card information has been stolen for the second time since August. Frustrating and time-consuming to deal with this!

I have finished reading through the Bible. More to come on this later, but PRAISE THE LORD!

Also, Cole has applied for residency in internal medicine and is being invited to interviews at many schools. It is an exciting time for us! I have the month of December "off" from rotation during which we are planning to do an interview trip. The best advice Cole has received, in my opinion, is to choose somewhere where your wife will be happy. Amen! I am thankful to have some time to visit some of the programs with him!  We are seeking the Lord with this decision and for a job/career direction for me wherever we land. We covet your prayers for us.

We decided on a whim to run the Greenville Spinx Half Marathon on Saturday, and are on the 2-week training plan.  It will be his first, and my 12th...I promise to take it easy on him :) Wish us luck!

Posted by Ashley at 9:38 PM No comments:

As you may remember reading on a previous post, Cole and I enjoyed this luscious soup at Rooster's in Charlotte. 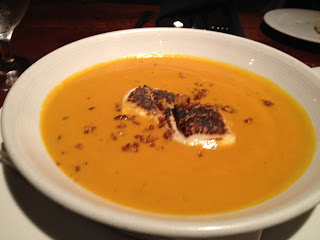 I have been craving it ever since, and here is my home recreation. I used this recipe for Creamy Sweet Potato Soup as a base and my version is below.

1 Melt the butter in a large, heavy-bottomed pot over medium-high heat. Add the chopped onion and celery and sauté for about 7 minutes.  Add garlic and sauté 2 minutes.
2 Add sweet potatoes, chicken stock, cinnamon stick, and nutmeg; bring to boil. Reduce heat and simmer uncovered until potatoes are tender, about 20 minutes.
3 Remove cinnamon stick and discard. Working in batches, puree soup in blender until smooth. Return to pot.
4 Add half and half and maple syrup and stir over medium-low heat to heat through. Season soup to taste with salt and pepper. (Can be prepared 1 day ahead. Cool soup slightly. Cover and refrigerate soup and celery leaves separately. Bring soup to simmer before continuing.) Ladle into bowls. Garnish with toasted marshmallows (broil on high for about 2 minutes) and spiced pecans (saute pecans in butter, brown sugar, and cinnamon). 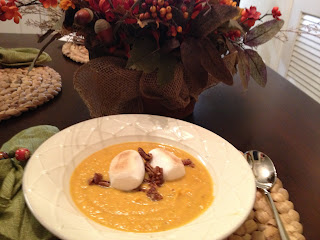 Maybe not as good as Rooster's, but pretty darn close! It was good the first night, but extra yummy the second day, so I would recommend making it a day ahead. Also freezes well!
Posted by Ashley at 10:38 PM No comments:

Ashley
Charleston, SC
I was born and grew up in the small town of Dillon, SC and attended college at Wofford. I am now in pharmacy school at MUSC in Charleston. I am a child of God, wife, daughter, sister, friend, and student with many hobbies and joys in life. Come explore these with me!